The short answer is no. Konnected does not support tamper/fault protection and has limited support for End-of-Line (EOL) resistors.

Konnected only detects and reports a binary state for wired sensors connected to it (e.g. open or closed; motion or no-motion). Traditional alarm systems commonly also detect a third tamper or fault state by using EOL resistors in the sensor wiring. Konnected does not detect or report tamper or faults in the wiring.

When using the Konnected Alarm Panel or Alarm Panel Pro connected directly to wired sensors, all EOL resistors must be removed from the wiring.

Why not? Isn't this a standard alarm system feature?

Konnected is designed to connect traditional security system sensors to home automation platforms like SmartThings, Home Assistant and Hubitat. These apps/platforms have built-in support for many types of binary sensors, but do not natively support a third tamper or fault state. For the purposes of home automation and smart home monitoring, which these products are designed for, a simple binary state is sufficient.

What are EOL Resistors and how do they detect tampering or wire faults?

Traditional alarm systems use resistors in the sensor wiring to create a known electrical resistance value on the sensor loop. 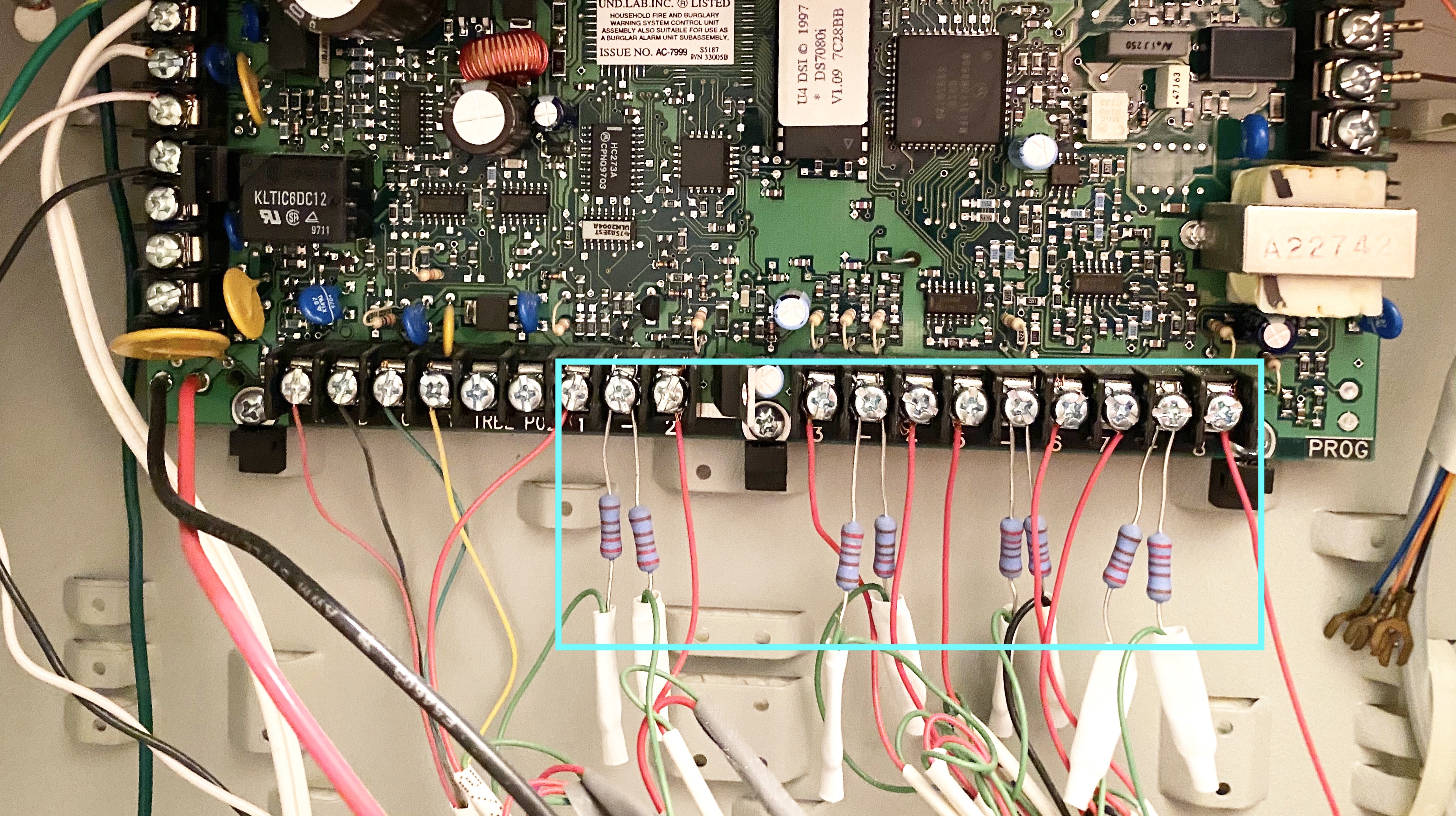 An alarm panel with 2210Ω resistors wired at the panel. This is common and typical, but in fact incorrectly done!

Resistance on an electrical circuit is measured in Ohms (Ω). A closed circuit on just regular copper wire should have no resistance (near 0Ω). On the other hand, an open circuit would have infinite resistance. On a circuit with a known resistance value such as 2200Ω, if the circuit was shorted to bypass the resistor, resistance would drop to 0 and this could be detected as a tamper by a traditional alarm panel.

When resistors are installed at the panel, they are not effective at detecting tampering anywhere along the wire run. And if the burglar has already breached your panel -- well then you have bigger problems than tamper detection!

Our conclusion: The vast majority of in-home alarm systems, even if tamper detection is technically supported, is not being used effectively and therefore is not (and never was) important for the DIY home user.

By design, the Konnected Alarm Panel does not support tamper or fault detection and requires removal of any resistors on the wired sensor loop when connecting them directly to the Konnected alarm panel. Most of the time this is easy, just pull out the resistors at the ends of the wires when you remove them from the panel. If your resistors were installed properly at the end of the wire and behind the sensor, it may be a little more challenging to pull out each sensor to find and remove the resistor behind it.

If you're unsure if you have resistors in-line, use a multimeter to measure resistance on the closed circuit. A measurement of single-digit ohms is expected if no resistors are installed.

Will Konnected detect a cut wire?

Yes. If a wire is cut, it would appear as an open circuit to Konnected, and this would indicate that the door/window was open or a motion detector was activated.