I have a Bosch alarm system, its pretty old 15+ years, over the years it's been upgraded to support cellular monitoring etc, and Im keen to keep the system as I haven't found a true WAF replacement for the codepad etc. that still supports monitoring here in NZ.

So I've been looking at the Konnected INTERFACE kit to upgrade the system to support some more smarts via HomeAssistant, but need to check a few things.

1. The system has 4 Zone connectors but they support 2 zones each using different resistors 3K3 for one zone and 6K8 for the other zone (see below). Can the konnected solution support this, would I connect two wires from the single zone connector on the bosch side to two separate zones on the konnected side and adjust each konnected zone to the correct resistance? 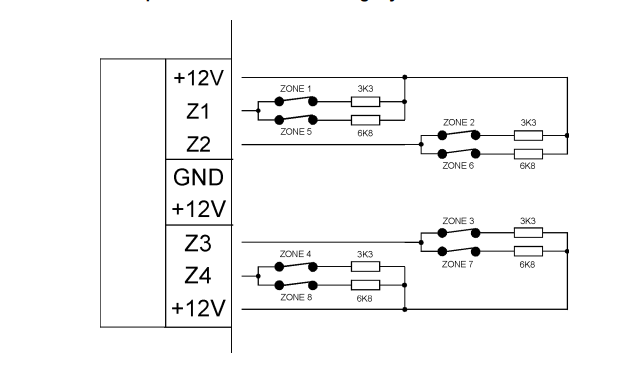 2. I'm trying to decode my alarm manuals (see attached) to understand if I can somehow monitor the armed state of the alarm dont really care about activated state as this could be triggered in hA based on armed state and the zones. Ive looked at the system and I can see wires into both Out 1 and Out 2. I believe Out 1 is the siren and Out 2 is for the smoke detector

I've attached the two manuals I've been working from to start to understand my system.